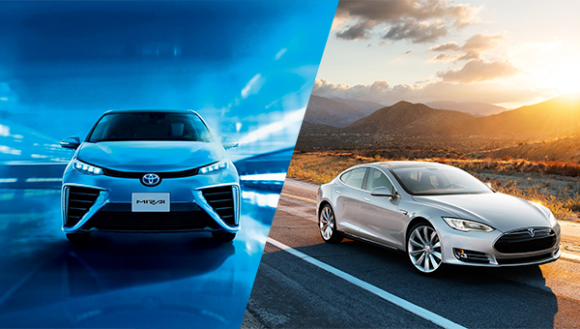 Batteries or hydrogen? The better question is how we transition from the ICE age.

As the eco mobility transition gains pace around the world and the range of zero emission offerings starts to expand, it’s inevitable that technologies will be compared.

And the comparison that’s dominating all clean transport discussions at present involves pitching one electric drivetrain against another – that is fuel cell electric versus battery electric vehicles.

Whether its efficiency, performance, range, charging time or price, these two technologies have, among certain groups, been positioned as competitive rivals with only one offering able to be crowned the electric drivetrain of the future.

A recent study by the University of Queensland has published its own electric vehicle comparison, this time focused on greenhouse gas emissions. It finds that hydrogen fuel cell electric vehicles (FCEVs) may have three times the emissions of battery electric vehicle (BEVs), if using non-renewable energy.

The study notes, however, that FCEVs have the potential to substantially reduce emissions in the long term, but on the condition that Australia significantly increase its use of renewable energy.

﻿The above conclusion, is of course, a similar story for BEV charging as the majority of Australia's electricity generation continues to be from coal (63% in 2016-17).

However setting this aside, from our perspective the focus on FCEVs versus BEVs is misplaced and short sighted. As a collective of zero emission vehicle advocates, we should instead be encouraging a shift in the conversation to how Australia can effectively transition away from fossil fuel burning vehicles to a cleaner, greener transport fleet over the long term.

What we can all agree on is that electrification is the future of transport and the death of the internal combustion engine is quickly gathering speed. Spain for instance is the latest in a long line of countries moving to ban it, last week introducing a bill to prohibit the sale of petrol and diesel cars from 2040.

As the world moves away from fossil fuels to electric drivetrains, the efficiency gains and emission reduction outcomes will be immediate.

For instance, FCEVs are double the efficiency of the internal combustion engine meaning carbon emissions are immediately halved (see NREL data). This is surely a better outcome than maintaining the status quo and denouncing technologies that can make a real difference to CO2 levels right now.

While the availability of a decarbonised grid and green hydrogen will maximise emission reductions from electric vehicles even further, our first priority should be to reduce current emissions by as much as we can and as quickly as we can. Hydrogen FCEVs (along with BEVs) can help us do exactly this.

Hydrogen mobility should also not be considered in isolation - hydrogen has a much bigger role to play in the energy transition beyond powering our vehicles.

As a flexible energy carrier, hydrogen can enable the renewable-energy system through storage of excess wind and solar that would otherwise go to waste while providing load balancing to the grid. In this respect, just as with vehicles, hydrogen and battery storage are complements, not competitors.

What’s more, Australia is being tipped to be a significant player in renewable hydrogen production, with the IEA World Energy Outlook published last week noting that “Australia’s potential to produce hydrogen fuel in this way could be vast.”

When this renewable hydrogen is produced from electricity that would have otherwise been lost, it’s a win all round for the energy producer, the end user and most importantly the environment.

So, with our natural advantages, Australia is well placed to establish a large scale renewable hydrogen sector to power our vehicles, and this is what we, as zero emission vehicle advocates are working towards.

Particular transport segments will strongly benefit from the hydrogen age, including areas such as heavy, fleet and autonomous vehicles where the long range, quick refuelling time and heavy payload capability of FCEVs are especially advantageous.

While the price of FCEVs and the availability of infrastructure is often a talking point, CSIRO analysis through their National Hydrogen Roadmap found that FCEVs will reach price parity with the internal combustion engine in 2025. This is in fact the same year that’s being forecast for BEVs.

On the infrastructure side, countries around the world have committed to build 2,800 hydrogen refuelling stations also by 2025. This is sufficient to cover the world’s leading markets for FCEVs.

What’s clear is that Australia’s future transport fleet will be electric and powered by renewable energy. However, we’ll need a range of solutions to help us achieve reduced emissions across the entire transport spectrum – passenger and commercial vehicles, marine and aviation.

This point is in fact acknowledged in the UQ study, noting that BEVs can’t cover all mobility needs due to range restrictions.

Hydrogen Mobility Australia has therefore been calling upon governments to implement a technology neutral approach in their development of policy and regulations and let the market decide which vehicle technology best meets their lifestyle, usage and application area.

In terms of industry and academia, let's apply a longer-term view beyond what product, pricing and energy composition is available in the Australian market today and think strategically about how we introduce the technologies that best optimise our renewable energy future.

And this is the electric drivetrain – be it hydrogen or electricity powered.